The Reality Behind The Headlines

Have you seen this headline on social media or the tabloids?
“Red alert to parents as convicted child predator arrives in Dublin…with a suitcase full of toys”. 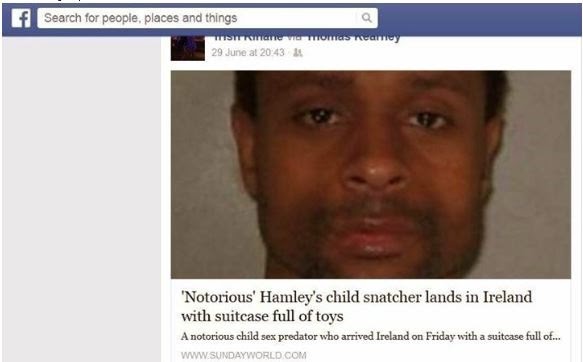 I find this kind of headline a bit grating. It’s sensationalist, scaremongering and it propagates the notion that the “predator” is the stranger, an unknown and probably “not from around here”. I’m not suggesting that anybody ignore the risk posed by this individual, but sadly, the truth is that children are at much greater risk from those they know and those who they are entrusted to, than the unknown stranger.

That’s a scary and depressing thought and I guess it goes a long way in explaining why we tend to demonise the stranger – who is as different to us in as many ways as possible. It’s easier to get our head around that, rather than confront the actual truth, that when it comes to predators of child sexual abuse, we don’t need to go far to find them.

I’m sure those people who shared the above warning on social media meant well and intended to inform fellow-parents and carers of an increased risk. But the stats show the profound misunderstanding of where the greatest risk dwells, and how the misunderstanding is perpetuated by a media in snappy headlines.

A paedophile is a person whose only sexual interest is in children. The majority of those who sexually abuse children are not paedophiles, but heterosexuals who have adult sexual relationships as well as abusing children. Both types of predator perpetrate heinous crimes on children and cause immeasurable suffering to their defenceless victims.

Figures provided by support organisations tell the story. Each represents a child who has had a crime perpetrated on them and has suffered an ocean of pain as a result.

One-in-Four (of their Psychotherapy clients, 2012):

o   53% were sexually abused within their own families.

o   8% were abused by family friends or neighbours

o   One third of the abuse committed on boys was perpetrated by a family member.

o   Boys are much more likely than girls to be abused by an authority figure, which may include a youth leader, priest, or sports coach.

o   Offenders are overwhelmingly male, at 96%. While the majority of abusers are men, both men and women sexually abuse children.

o   In about a quarter of cases, the abuser is him or herself a child or teenager.

o   In 86% of child abuse cases, the abuser is likely to be well known to the family, if not a family member.

These numbers tell a harrowing story and they show that while the stereotype of the child sexual abuser suggests that they are instantly recognisable as suspect, in fact, in most cases, child sexual abusers appear to be ordinary, trustworthy people and the majority operate very effectively and ‘normally’ in society. Child sexual abusers come from every type of social background. In some cases, they may be socially skilled individuals who take up leadership roles in the community. So, when it comes to protecting your children from sexual abuse, it’s more likely that you will already know the person who is most likely to be the predator.

Parents, we need to be OK with our child shouting words like NO, STOP, I WONT, and I HATE YOU, – at us – from time to time. It is a very necessary life skill! Having that permission in place helps them in many ways. It helps their assertiveness and confidence. It helps them to develop awareness of their safety and well-being.

Kids will be better able to take the right action to protect themselves when they have “rehearsed” many times over, in safety, and in an age appropriate way. Obviously, there are times when it’s inappropriate for children to shout etc at parents, but also, there are times when they are quite entitled to do so. Communication channels need to be open for anything, and us parents need to be able for it all (ouch), if we are to provide the healthiest psychological and emotional training ground for our kids.

Listen to, and hear our children. When we are talking, we’re probably  not listening. Have those quiet moments when you really listen and hear your children – like bedtime. And always believe children. If you’re incredulous or shocked at something they tell you, accept it and carry out your own inquiries subsequently.

Encourage children not to keep secrets. Abusers will often develop a strong bond with the child before doing something sexual. They will test the child’s boundaries in some other inappropriate way at first. Explain to children how some secrets are not safe to keep.

Parents need to be involved in their kids activities and know what others are doing with your kids. Above all else, ask the awkward questions and inquire – always. Our children’s safety is way more important than someone being embarrassed, inconvenienced, or even offended. Children depend on our support in this regard.

A good news story in Ireland, is the launch of The Child and Family Agency, called Tusla. This is a statutory organisation, established in January 2014. Under Section 8 of the Act, it is required to support and promote the development, welfare and protection of children, and support and encourage the effective functioning of families. It’s a strong step in the right direction from government, albeit brought about after years of neglect and denial.

If you’ve been affected by this piece or need further information, contact me or use one of the following links:

Big Decisions – in your life..